Ya gotta be kiddin..

The anti-gunners are at it again..

What now? They want a boycott Starbucks as they have no wish to play politics and run with what is legal shall be. So here they go again. Their plan is Valentines day to issue a protest letter and boycott.

I suggest we cop-opt their stupidity and turn it around.

Now I generally don't do boutique coffee. But I will BUY Starbucks on that day as a statement of support for a company who wishes to sell coffee and all the trimmings and not be a political entity. I suggest you do same and let them know why too. Oh, if you can open carry where you are please do so. It gives the 'phobes fits.

As usual keep your powder dry and be safe.

Screw the dark, I weild light!

I propose a display that will show we have the same goals, but our side is actually interested in results." - Weerd

Our anti gun fiends who suffer the cognitive dissonance of fear can light a candle. I suspect they fear the flame. Cowards one and all they be. Go live with your fears and bow to those rough men that would do what you cannot for they will surely rule you.

I'm in the Volksrepublik (Ma for the uninitiated) so a firearm is a process that requires money and time. So I can 't have a good looking picture of my gun as it doesn't exist in this state yet. However, for those that read that as being unarmed foo on that. 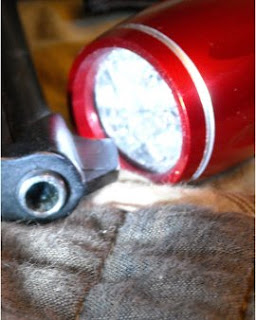 I have the enemy of evil, light. Portable bright ones that kill night vision and general light that makes the inside and outside bright. It is also the symbol of knowledge and understanding. I light the light to make the statement that if you fear the dark, light a light and learn. With both I can push back the dark as I do not have to fear it. 'Id argue that the Constitution does not say I have he right to be armed, to me it says the government has no right to disarm a citizen of good standing and that is me.


Unarmed, that is their wish.

I don't buy in to being unarmed. There are tools of all sorts to avoid a bare hand fight. But lo there are things that propel lead that even our fair stasi permit. Rifles and pistols of .22 caliber and .177 that are good for velocities far higher than so called called BB guns. Yep, the Ruger may only be the UMAREX springer but a pellet at 1000fps punches a clean hole through a 5/4ths fir board. The long barrel target pistol pushes a .22 pellet through things too. Yes, like the sometimes maligned .22 rimfire, you have it, you learn to be good with it, and use what you have. If all else that Ruger looks like an EBR with a black stock and at over 8 pounds it would hurt to get butt stroked by it.

So for the night there will be the three weapons handy by me, two rifles, a pistol of non toy air propelled plus the light that fights back the dark. One would argue it's a weak gesture but the line goes, care to take a chance on that? Can you tell from 20, maybe 10 feet that your evil intent to continue carries no risk?

Of course a firearm is better but, I'm far from unarmed. I do so in the light. I have taken the first steps long ago and decided that being a victim is a terrible choice. Being a unarmed by anothers choice is unacceptable.

I light a light to be far from the dark. I keep tools handy and learn to be sharp with them. I do plan to fight ignorance and the evils that live by it.

That Damn cat had a name, Ming. 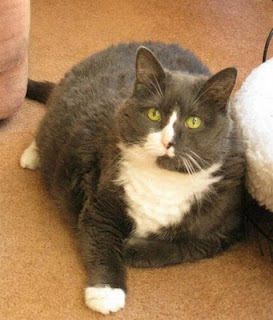 Ming was a domestic shorthair of the lopsided grey and white. Cute, cuddly and a purr that wouldn't quit.

That Damn Cat could shed. Winter or summer the fur would fly.

That Damn Cat started peeing on the rug. Never stopped the habit though later at about 11 years old we found out she was diabetic. The cat was type 1 insulin dependent and we gave her insulin twice a day and tested her blood to make sure it was right.

That Damn Cat at 15 developed arthritis, we did pills and later injected drugs to help her move and be a cat. Then they didn't help any more.

That Damn Cat peed in the bed, her bed, and then anywhere. Seems at 17 almost 18 years of age moving was too hard. The kidneys were going and the left leg didn't work anymore. She'd drink water and lay on the floor all wet. That cat was fat and so enjoyed eating. But, then she couldn't get to the bowl to eat without help it was a sign.

Today I took Ming to the vet for the last time. I knew it was time when she didn't flinch or try to get away. There was no hope, age and disease took what made her a cat. It was hard to do. It was a matter of dignity for her. The vet understood and was exceedingly gentle. She is gone now.

I miss her. She did things that annoyed me and I loved her and petted her and tried to keep the fur brushed. I did what i could to keep her healthy and safe. For all the years it was a good life for a cat someone dumped, someone rescued, and someone loved.

That Damn Cat left a big empty hole right in my heart.

If you can't deal with people saying "Fuck" a lot, move on to another blog.

1. Be nice to one another. Calling each other nasty names will result in the cyber-equivalent of the Blog Title being administered.

2. Contributors are my friends. Keep that in mind.
3. Content is property. Fair use rule is if you're making money on it, direct or indirect, I get a slice. Or a kneecap.

Talk without thinking is like shooting without aiming.
English proverb

Secure your shot and powder as surely our enemy will take it.

To see what is in front of one's nose requires a constant struggle. -- George Orwell

Truth: the most deadly weapon ever discovered by humanity. Capable of destroying entire perceptual sets, cultures, and realities. Outlawed by all governments everywhere. Possession is normally punishable by death.-- John Gilmore